There is life in the Gowanus. (Just don’t try to swim in it.)

Back in April, activist Christopher Swain tried to swim the length of the Gowanus Canal. He made it about an hour, before climbing out and proclaiming, “It’s just like swimming through a dirty diaper.” One of the most polluted bodies of water in the US, the Canal was designated as a Superfund site in 2010. When I tell people I study what lives in the Gowanus Canal, the next question I get is usually “There are things that can actually live in there”? But spend even a few hours peering into the oily, obscured murk and you will see all kinds of life forms making it work, just like their fellow New Yorkers, in substandard housing. Some of these life forms are familiar and some, not so much. 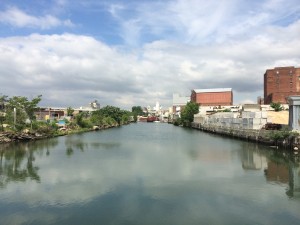 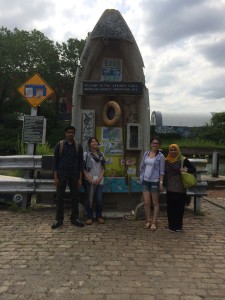 If you stand on the bridge at Union or Carroll Street, you’ll notice the water is not still, but is usually moving in one direction or another. You’ll also notice the water level changes rather dramatically over the course of the day. This happens because of the tide moving in and out from upper New York Bay. The tide brings in marine critters, and some of the species we observe in the Canal are likely to be transient, swept in and back out with marine water (like the dolphin that swam in and died in 2013). The fact that the Gowanus is still a tidal basin, very much connected to NY Bay, was brought into sharp focus during Hurricane Sandy when the canal overflowed its banks. Previous flooding events included the famous “poonami” event of 2010 (google it, but be warned it cannot be un-seen) which also demonstrated the enormous amount of raw sewage that the canal carries during even minor rain events, due to NYC’s combined sewage overflow system (14 of which flow into the canal). In the face of this organic overload and the microbes that grow and consume oxygen, tidal flux is not enough to fully oxygenate the canal. A flushing tunnel connected to Buttermilk Channel was re-opened in 1999 though it is not always open.

The history of Gowanus mirrors the history of New York’s relationship to its coastline. First it was a convenient place to dump anything and everything, from dead horses to toxic PCBs (if you want a thorough description of what is in the canal, read about it here). Then it became a public health concern and a damper on development. Now there is renewed hope and growing realization that all is not lost for the Gowanus. As a symbol of life emerging from urban decay, it is hard to beat.

As a marine biologist, a Brooklyn resident and a member of a team studying microbial evolution in the Gowanus, I can say that the Canal constantly yields surprises. To be sure, the nasty stuff you expect is there, and we can document it with molecular techniques. One of our projects involves using metagenomic techniques to look at the gut microbiome of fishes that live in the Canal. We find a whole lot of sewage-associated microbes, including many that are disease-associated. There is also a healthy population of sewer worms and methanogenic Archaea, single-celled organisms famous for their capabilities as extremophiles. Basically, we agree swimming in the Gowanus (or eating anything out of it) is not a good idea.

Nevertheless, we find other species making a living in the sludge. Blue crabs are pretty abundant and you will find some sizeable ones hanging out near pilings. Even horseshoe crabs, which evolved 450 million years ago and presumably have seen most of what nature can throw at them, have been known to hang out on the Canal banks and have even been seen mating there. Wading birds, like egret and blue heron, as well as your standard waterfowl (Canada geese) and seabirds (herring gulls) feed on various things in the water that we mostly hope are fish (though we did see a gull eating a dead rat one time). Among the fish, mummichogs (a type of killifish), American eel, bluefish and striped bass have all been caught in the Canal. 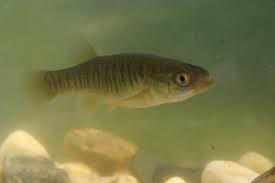 Of these, most are probably transient, caught up by the flushing tunnel. Some of the mummichogs (Fundulus heteroclitus), however, might be resident. This highly resilient little fish is notable for being able to withstand over 1000x the levels of PCBs of any other vertebrate. It is a model organism in ecotoxicology. One of our interests is how this species manages to persist in a habitat highly contaminated by heavy metals, raw sewage, and every kind of organic pollutant you can think of. Does its gut microbiome play a role, helping to break down toxic compounds before they impact the fish? Has its genome evolved resistance to particular pollutants, as has been observed in other populations of mummichogs? We have some initial clues to the answers – stay tuned for more!