We study the origins of fish diversity in African rivers and lakes, with a current focus on some of the most extreme aquatic environments found on the continent. For example, much of my work has focused on fishes of the lower Congo River (LCR), an extraordinary diversity hotspot characterized by some of the most extensive and powerful rapids on Earth. The LCR is comprised of a series of underwater canyons and high-energy rapids formed as the river plunges 280m over 350km to the Atlantic Ocean. The hydrological complexity of the system has generated over 90 narrowly endemic fish species in a short stretch of river. Recent projects carried out in collaboration with colleagues at the AMNH include species description (Stiassny and Alter 2015), convergence and speciation in spiny eels (Alter et al. 2015), and genome-wide analysis of an adaptive radiation in cichlids (Alter et al. 2017). A new set of projects, carried out in collaboration with colleagues from the Ethiopian Biodiversity Institute and Natural History Museum of Milano, likewise investigates the origins of fish diversity in another extreme environment: the Danakil depression of Ethiopia, known as among the most arid regions on the planet (Chiozzi et al. 2017).

Convergent evolution in Congo fishes: Phenotypic convergence provides powerful insight into how morphological diversity is shaped by selection, but most studies to date have focused on intra-specific or intra-generic comparisons of single traits. With support from the National Science Foundation (DEB), we are investigating a striking instance of in situ, multi-trait convergence across a broad phylogenetic spectrum of fishes endemic to the lower Congo River. In this extreme selective environment, representatives of distantly related fish lineages have independently evolved complex suites of convergent traits including depigmentation, microphthalmia or eye loss, body depression with metameric increase, enhanced latero-sensory anatomy, and hypertrophied jaw and branchial musculature (Stiassny and Alter in press, Aardema et al. in review).

Such striking phenotypic convergence spanning deep phylogenetic distances strongly suggests a shared signature of selection, and provides a model system to address the following questions: 1) How deep is the morphological correspondence within and between clades, and to what extent do multiple traits evolve as units? 2) How rapidly have these phenotypes evolved? 3) Are the genetic mechanisms generating phenotypes the same across some or all species, or entirely phylogenetically contigent? By providing a novel comparative framework for this newly discovered system, we are working to lay the groundwork for understanding the evolutionary context of phenotypic convergence across multiple levels of biological organization.

Stiassny, M.L.J. and S.E. Alter. 2015. Phylogenetics of Teleogramma, a riverine clade of African cichlid fishes, with a description of the deep-water molluskivore —Teleogramma obama — from the lower reaches of the middle Congo River. American Museum Novitates 3831:1-18. 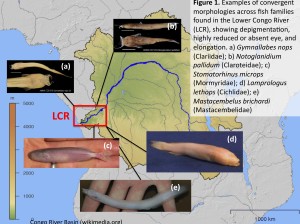 Understanding the evolutionary mechanisms that generate biodiversity is crucial for conserving species – however, we lack a thorough understanding o...

We use modern and ancient DNA to explore how whale and other marine megafauna have responded to climatic changes in the past and whaling. This work is...

The scaliest New Yorkers have evolved in various ways to cope with the stresses of city life. These urban fish can tolerate pollution and bacterial lo...